Anthem? No Thank You

Anthem. It’s coming soon, people are talking about it, there was a demo, and yet I wish it didn’t exist. Let me explain why.

Loot and gear doesn’t interest me aside from that it allows me to complete more content and get more of the story. If I could play the entire game with the same armor and weapons I’d be fine with that. Gaining new skills is fun, but also not my primary motivation.

It should be no surprise that I loved Dragon Age: Origins. It was completely story-driven and everything I did unlocked more pieces of the story. I knew next to nothing going into the game; I’d only heard from others that it was good. I called in sick the next day because I had to keep playing. I’d become attached to the characters and I needed to know what would happen next. Someone told me I’d probably also like Mass Effect 2, so I played that. When I finished, I wanted to play the first one to play the story I’d missed. The first one wasn’t as good: the combat was clunkier, but the story was still there so I didn’t mind. I was just killing baddies to get more story. The one part I hated was driving the mako around desolate planets looking for stuff. 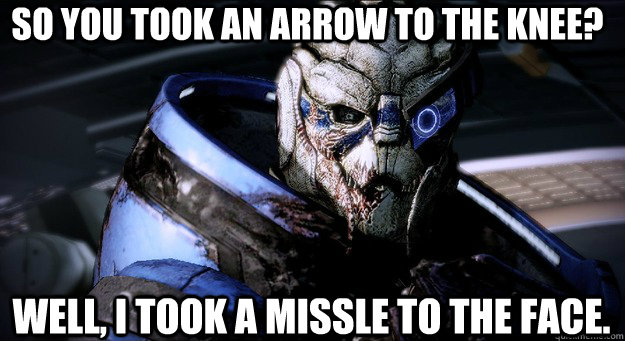 Don’t get me wrong, I enjoy exploration. I particularly dig it in MMOs. What I hate is being unable to find something specific, which is exacerbated by trying to maneuver a vehicle with difficult controls.

People gave Dragon Age II a hard time, but I loved it. Yeah, the combat zones were all repeated, but who cares? The combat isn’t the point of the game! And the story was good and not your typical fantasy RPG story. Plus Hawke is the best player character since April Ryan. I didn’t love the Mass Effect 3 ending, but it didn’t bother me as much as most people. I still loved those games.

Then Inquisition came out. Before Inquisition there was Skyrim. It was very popular and featured an “open world.” I played it. It took me a while to get into it. I hadn’t played a non-Bioware modern RPG. I found the NPCs incredibly boring and my quest log just filled up with so many quests and I didn’t know what to do. I’d about given up on it when I read somewhere about certain quest lines that were interesting, and after a lot of mods, I finally got into it. When I heard Inquisition was going to be more open-world I was very disappointed. I didn’t want Bioware following trends and trying to make their next game more like Skyrim. I just wanted another Dragon Age game.

The intro started off well enough. We had some returning characters and intriguing new ones. Then we were dumped in this Hinterlands place—and it was an open world and we had 101 things to do there. I didn’t want to do these things. They were boring. I don’t like side quests. They distract from the main story. (Unless it’s Skyrim and the main story is boring and the side quests are more fun, but I’d prefer a brilliant main story and a handful of side quests that tie in to the plot—which I thought Mass Effect 2 did the best.) I found out I just had to do enough to get out of there and unlock more main quest, but I kept getting lost. My objective would be just beyond that mountain that I couldn’t climb over! I’d run around in circles and just get mad at the game. I’d still say I loved Inquisition—there was enough story and character development to make up for all the frustration of not being able to find silly side quest objectives.

But then we got Mass Effect: Andromeda. Which seemed like Inquisition, in space. And the mako came back. My least favorite thing in the entire original Mass Effect trilogy was a big part of the new game. I have 4 hours into my trial on Origin and I keep thinking maybe I’ll come back, but my play time is limited.

All I want is for Bioware to make the kind of game they’re good at. No trend chasing. I don’t love open-world RPGs and I like playing Bioware games alone. By myself. Aren’t video games supposed to be an introverted hobby? I like MMOs because they’re a mix of playing solo and being social. I like RPGs because you can play by yourself. I’m not a trend chaser. I’m not interested in MOBAs or battle royale, and Don’t Starve is the only survival game I’ve ever loved.

This is a very long explanation of why I’m not interested in Anthem to the point of being disgruntled about its existence. While I know there is a story, from what I’ve read, it’s not _about_ the story. Gear collection and customization seems to be a primary goal, which as I’ve said, does not interest me. After the game releases, if the reaction is positive, I might watch some Let’s Play videos and decide if it’s something I want to spend money on, but I’m not feeling optimistic. The flight suits are a turn-off for me: if I’m going to be playing a game that involves just running around fighting things, I don’t want to have to navigate a 3D space. I’m a bad enough navigator in real life. My biggest hope for Anthem is that it flops and Bioware can go back to making Bioware games. It seems more likely that it will flop and Bioware will fold into EA’s all-encompassing bosom. Even more likely that it will succeed and Dragon Age 4 will be an open world RPG focused on multiplayer and crafting where you fly around on a dragon.

I want _story_. I think video games are the best way we have to tell a story. Better than TV, film, and even books. Because they’re the most immersive, they have the biggest impact. I was thinking recently about the huge emotional impact I felt after playing Life is Strange. I wondered if my feelings would have been as strong if I’d read it as a book. Probably not. A major part of the impact comes from actually being a participant in the story.

Bioware was a major studio actually leveraging the amazing storytelling power of video games. Now their next major game gives story a backseat. Where do we go from here?

Cover image is from Dragon Age: Inquisition. Still a good game, despite all the boring bits.

9 thoughts on “Anthem? No Thank You”

Alli is the proud mother of one amazing kid and one happy baby. She enjoys video games, books, knitting, spending hours reading TV Tropes, and other nerdy activities. She daylights as a Software Engineer.